When the children return (Children of the Eye Book 2)

When the children return (Children of the Eye Book 2) 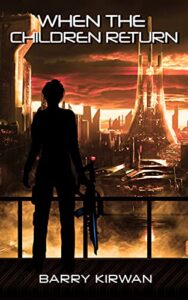 Ten years ago, Sally had her world ripped away from her – now she’s taking it back.

A decade ago, ten-year-old Sally watched helplessly as the brutal Axleth invaded Earth. She and a few hundred others escaped aboard the spaceship Athena, piloted by the secretive Artificial Intelligence who calls himself Ares. Now, as they approach Earth, she leads her fearless band of refugees determined to take back their home at any cost.

But much has changed on Earth. Finding allies willing to rise up against the Axleth stranglehold will be difficult. And as they near the Solar System, the Athena is tracked and attacked by an enemy ship. Something has followed them from the depths of space.

As war erupts on Earth, Sally’s small army must show more courage than they knew they possessed, and Sally herself must come to terms with what it truly means to be a battle commander, and decide exactly how much she is willing to sacrifice to win back her planet.