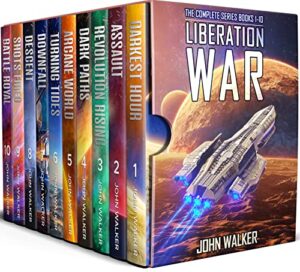 A massive sphere appears near Earth, defying all attempts to communicate or understand its purpose. Power outages plague key cities and military bases, causing wide spread panic and chaos. Only the Space Agency seems to have a grasp on the situation but with all their combined resources, they’re baffled.

Captain Warren Miller races to join his colleagues in the Agency headquarters, hoping to convince his superiors to launch their latest space craft, the battlecruiser Leviathan, which may be able to defy this intruder. In the absence of communication, he hopes a little intimidation might bring about a conversation.

But then smaller objects descend upon the Earth, grabbing up people from all over the globe. Captain Miller never makes it back to base, forcing the Agency to scramble for a response. With the weight of an expectant world beating down on them and the alien threat looming above, they have no choice but to engage the enemy or simply witness history in the making.