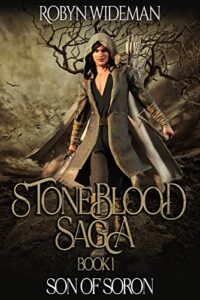 When tragedy strikes a young boy is forced to become a warrior.

To escape a perilous royal life, Soron and Velaina disappear to the small village of Elderwood, a magicless kingdom, to raise their son in secret.

But when their child Nathan begins to show special powers, they realize they are no longer safe. Soon they’ll have to reveal their secrets to Nathan. However, before they can tell Nathan the truth, a cruel and arrogant Duke attacks and kills most of the people in their small village, including Nathan’s parents. Nathan finds himself lost and alone with his heart set on revenge.

With the help of his Uncle Verin, he continues the training his father started. But the Duke isn’t finished. He’s returned to kill the survivors, especially Nathan, to hide his crimes from the world. Unable to locate Nathan, the Duke kidnaps Nathan’s best friends to lure Nathan to him. Anger and fear consume Nathan and the strong emotions ignite powerful magic within him. Using his new powers,

Nathan is able to hunt down the Duke, but he’s in a race against time. if he can’t catch them soon he’ll lose his chance at revenge and more importantly, he’ll lose the people he loves.