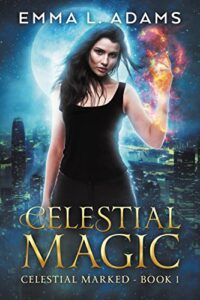 Devi Lawson has a talent for breaking the rules. It’s second only to her skill at hunting down demons — too bad the angelic guild of celestial soldiers didn’t appreciate her efforts. In fact, they kicked her out.

And now she’s being accused of murdering one of their own.

To clear her name, she must work hand in hand with the demons she used to hunt, including the sexy warlock Nikolas Castor. Not only is his magic entirely too close to the killer she’s pursuing, but he seems to think Devi is marked by a demon, too.

Before long, Devi is neck-deep in trouble. Distrusted by her former allies and in serious danger of the real reason she left the guild making it into the light, Devi must catch the killer before he unleashes literal hell on Earth.