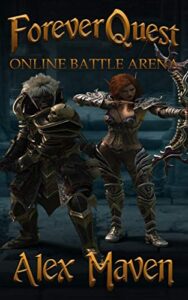 When a down on his luck, old-school gamer, wakes up in a daze on a foreign stage. He realizes he’s about to be forced to fight to the death in an online battle arena of Ortem’s most popular virtual reality game.

A battle where only one group can survive.

There are no respawns.

He has a chance to escape but realizes Ortem’s corporate goons have also caught his sister. Determined to save her life, he doesn’t run.

What’s worse, the game masters spawned him into the world with the worst race-class combination in the game—a sickly dark-elf death knight.

Still, can he find his sister and make it out of the game with her alive?

A LitRPG & Gamelit novel full of adventure, comedy, bad puns, and a hint of romance. It’s the Hunger Games if they tossed it into the blender with World of Warcraft and sprinkled it with poorly paced jokes.