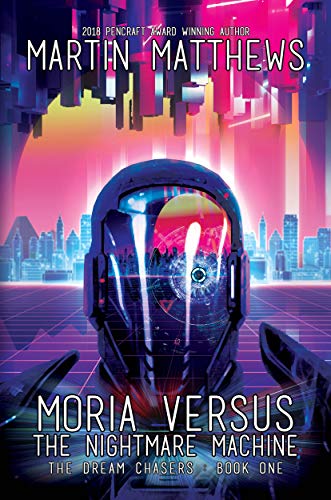 Sixteen-year-old Christopher ‘Moria’ Unus lives in two realities: the humdrum existence of his tower-block home and high school career and the fantasy universe of the Dreamnet — a collection of worlds built within a vast organic quantum computer network, where much of the population now spends its collective time constructing their own versions of life, and where a battle for control over this vast new dream frontier is taking place.

But when Christopher’s best friend and Dreamnet hacktivist Sarah Furgol stumbles upon an experimental military code to power her own Dreamnet creations, they unleash an unthinkable terror, transforming the dream into a nightmare, one that takes the form of Christopher’s estranged father.

Faced with the reality of losing Sarah to this unstoppable artificial intelligence, Christopher must choose between joining the sworn enemies of Dreamnet freedom or watching everything they’ve fought for be destroyed by The Nightmare Machine.