The Hound of Hell Boxset(Books 1-3)

The Hound of Hell Boxset(Books 1-3) 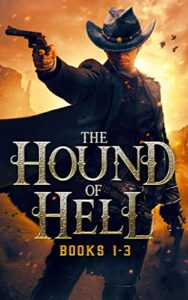 A deadly extraction. Ruthless enemies. Will the cold-blooded skills of this knighted war criminal be enough to evade a brutal demise?

Box Set: Over 800 pages of gritty, breakneck action alongside the ultimate spymaster.

Renault isn’t afraid to get his hands dirty. Tasked with rescuing a captive aboard a train, the fearless member of the Brotherhood of Merlin schemes to take out the hundreds of soldiers guarding the target. But when his own men betray him and critically compromise the mission, this servant of the Round Table finds himself alone and on the run.

Barely escaping capture with his secret identity now exposed, Renault enters a deadly game of cat-and-mouse. But though he’s ready to go head-to-head with a formidable opponent, the cunning warrior’s battle for survival may be his last…

Can he slay those after his blood, or will he fall to a vicious gang of cutthroats?

The Hound of Hell Boxset contains the first three books in the electrifying Hound of Hell dark fantasy series. If you like flawed antiheroes, gruesome skirmishes, and explicit scenes, then you’ll love Rory D Nelson’s collection of high-octane thrills.