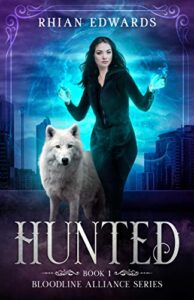 Sometimes, the truth is not always the answer.

Circumstance bought them together. Connection brings them closer. Can an alliance save them?

Running for her life, seventeen-year-old Kayla wishes her parents were here to train her now she’s finally received her magic. Instead, they leave her with the near impossible task of finding Killian – a shifter she knows nothing about.

Her mission leads her to cross paths with Blake, a kind-hearted sixteen-year-old who shows her light in the darkness. She desperately tries to keep him away but when his family are taken by a group of shifter hunters, she finds herself tangled in a secret she must be willing to die for, becoming bound to Blake in ways neither can explain.

Chased across the country, Blake and Kayla are caught in a lethal battle for superiority between shifters and magic users. Will they be able to accept the devastating consequences their hunt for freedom may bring?

Set in England, book 1 is a slow-burn romance with minimal swear words/cussing.