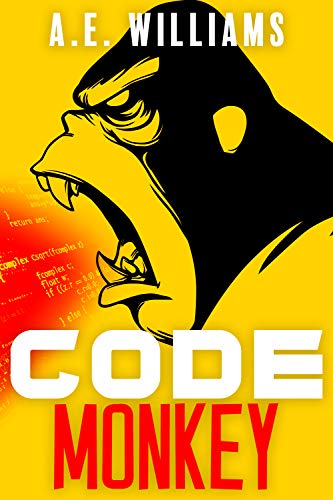 THAT IS ONE ANGRY MONKEY!

CODE MONKEY follows the trajectory set by ROCKET SURGEON, as A.E. Williams opens up a can of whoop-ass on science, technology, politics and religion. Yeah, all those uncomfortable subjects that polite people eschew during cocktail party banter are just gristle for the mill as far as Williams is concerned.

Rocket Surgeon was just the first stage! Code Monkey ramps it up with a second-stage-to-orbit collection of articles, essays and unpublished works that will leave you shocked, aghast and rolling on the floor laughing.

Follow irascible raconteur, voyeur and mental saboteur A.E. Williams down a whole slew of rabbit holes, conspiracy theories, discussions about the fallacies and truth of the challenges of our times! You’ll discover why Williams is one of the most sought-after essayists on the planet. (Sought after by aliens, Sasquatch, sea serpents and hackers, that is…)

Once more, A.E. takes you by the hand and shoves facts, figures and statistics up your…nose, until you are spitting mad at finding out you have been duped all this time by Big Brother, the Deep State, the Man, the Establishment and even your lying parents! (Oh, for the sake of Santa! How could you!)

Williams regales you with personal tales from the aerospace trenches. He shows why firmly held ‘scientific’ facts are just as suspect as ‘truths’ that have been debunked, time and again. You’ll be cramming your tinfoil hat past your ears as you are exposed to the grim secrets of how the world REALLY works!

And, as always, you’ll chuckle and chortle your way through page after page of outrageous stories, anecdotes and observations by the man Cleopatra* said was “So funny I laughed my asp off!”

Get your copy TODAY and join the ranks of computer-literate primates who have gone bananas over riots, COVID19 and all the troubles in the world that have you praying for the Second Coming, World War 3 or a long-overdue asteroid strike!

*Cleopatra Jones works as a hair stylist in Roanoke, Va.