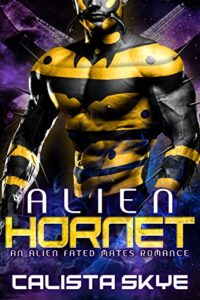 Grace
I’ve shot a hornet.
He’s eight feet tall, with bright yellow stripes, buzzing wings and hard compound eyes.
And he is very angry.
He abducted me from my farm and took me away in his spaceship, which looks like a hornet’s nest on the inside.
But before that, he stung my friend. And with a stinger that size, that had to kill her on the spot.
So I have my reasons for hating him.
He’s clearly an alien, more hyper-muscular man than hornet. But he’s buzzing louder and louder, and I think he’s furious.
And if that protruding rod there is not his stinger, then I don’t want to know what he’s planning to do with it.
Let him try. I’m not going to be his hive mate.

Tzor
I had to take her. She smelled so good it made me dizzy.
I don’t even care that she shot me first.
But biting me, a Royal Scout on a crucial mission? That cannot go unpunished. Even now, my blood is red on her lips.
She is delectable, round and scandalously female. The air in my spaceship is thick with her fear. And something else that I can’t identify, but which nearly makes me faint and forces my crotch to swell dangerously.
I think I know what her punishment must be.
And I think I will enjoy it.

Alien Hornet is the fourth book in the Alien Abductors series of science fiction romance novels. The books are complete stories, but should be read in order for maximum enjoyment.

Expect steamy scenes, mysterious aliens with features like adult toys, deadly planets and the love story between a girl from Earth and a sensationally hot alien with hidden talents!