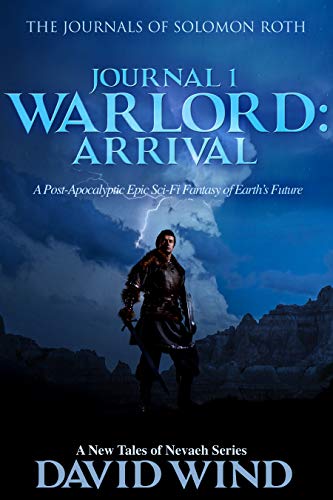 From out of the post-apocalyptic ashes of a dead Earth, 200 people placed into hibernation are sent into space to keep the last of humanity alive. Three thousand years later, the sole survivor of that starship awakens into the post-apocalyptic world of the planet of his birth
–A New Science Fiction/Fantasy from the Author of the best selling Tales of Nevaeh series. WARLORD: Arrival, Journal 1 of The Journals of Solomon Roth
–The Journals of Solomon Roth is a new series based on the Post-Apocalyptic sci-fi fantasy, Tales of Nevaeh series. WARLORD is the story of Solomon Roth’s return to a vastly different earth 3,000 years after he left. The first books of the series will follow Roth’s rise as one of the most powerful warriors in Nevaeh.
–As was the series, Tales of Nevaeh, WARLORD: Arrival, is both science fiction and fantasy. Reviewers have called it a mixture of Shannara, The Hundred, with a dash of GoT thrown in, and reminiscent of Andre Norton. WARLORD: Arrival, combines futuristic Post-Apocalyptic societies ruled by scientific magic, metaphysical powers, and strong men and women. The series follows Roth as he brings the dominions of Nevaeh together to fight the Dark Masters and their armies of slave.