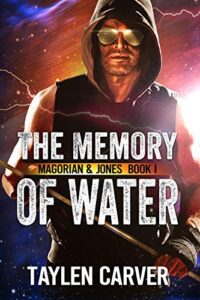 When a skeptical doctor teams up with an honest-to-god wizard on a quest for an ancient and powerful manuscript, enemies lurk around every dangerous corner.

Dr. Radford Michael Jones has dedicated his life to the treatment of the goblyns, fae, dragons, sirens and even more races which humans call the Errata.

Frustrated in his attempts to treat the newest race to emerge, Jones consults Magorian, whom the Errata call the first and only wizard of the millennium, his skepticism at full throttle.

Benjamin Magorian III has no time for the Errata, who did not spend a lifetime learning magic as he has done. He has even less time for Dr. Jones, who doesn’t respect his work. Yet his powers are needed.

Magorian and Jones’ combined talents embroil them in a deadly search for an ancient manuscript, the Book of Morcant, which may hold the dark answers both of them so desperately need.

The Memory of Water is part of the magical urban fantasy series, Magorian & Jones, by Taylen Carver.