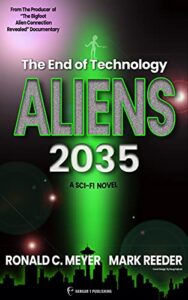 A riveting sci-fi thriller that takes the reader into the heart of the dangers of alien intelligence’s already among us.

What starts out as a fight against a Russian oligarch by Michigan’s Upper Peninsula Potawatomi Indian tribe to help the Bigfoot take their next evolutionary leap turns into a deadly battle between extraterrestrial entities for control of the Bigfoot’s supernatural powers of interdimensional travel. A diverse team of American investigators led by tribal leader Larry Redhawk must shield both Bigfoot and human civilizations from competing non-human intelligences, or humanity will be thrown back into a technological dark age.