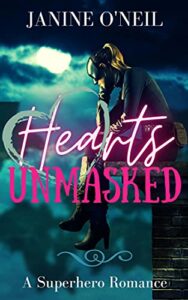 Marissa Davenport is the girl who has everything. At least that’s what the tabloids say. Heiress to her father’s multimillion dollar fortune and daughter to the most beloved socialite of the society pages, Marissa has dated sports stars, Hollywood A-Listers, and the bad boys of Broadway. She attends the fanciest parties, award shows, and club openings.According to everyone, Marissa is the epitome of the spoiled rich girl, right down to her Prada handbag.
But they don’t know her secret. When Marissa isn’t parading down Fifth Avenue she is wearing a mask, one she created herself thank you very much, and livestreaming heists as the one and only supervillain vlogger: QueenBee.

Adam Lu is more comfortable in the mask than out of it. His whole life has been a chain of command. As Agent 7 he puts the skills forged by the military to work, taking down small time villains and telling himself that is all he needs to be happy. When the Anarchist starts blowing up parts of downtown Havenbrooke, Adam is put on the case. And no one is more surprised when he runs into QueenBee, a B-list villain with more likes than skills.

When one of Anarchists bombs force the two of them into a room-sized safe, the chances of them getting out are low. These two enemies will have to learn to work together to break free. What will they do when they are forced to face who they are under the mask?