The Bloodless Assassin: Quirky Steampunk Fantasy (The Viper and the Urchin Book 1)

The Bloodless Assassin: Quirky Steampunk Fantasy (The Viper and the Urchin Book 1) 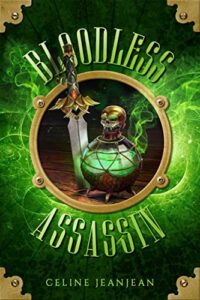 Blackmail an assassin? Who would do such a thing?

Someone pretty desperate, that’s who. Which is exactly the position Rory finds herself in.

As a scrawny, dreadlocked pickpocket who grew up on the street, life hasn’t given her a ton of options. On top of which, her partner in crime has screwed her over for all her money, so she can no longer pay for the sword master who was supposed to train her—her ticket to a new life.

She’s not prepared to give up on her dream of becoming a great sword fighter, though. Which is why when she stumbles across an assassin’s secret, she immediately sniffs an opportunity. Blackmail can be a pretty effective strategy, after all. If he trains her, she’ll keep her mouth shut.

The risks in blackmailing an assassin are pretty high, but if she can pull it off, she might finally be able to realise her dream.
That is until she realises that the assassin’s she’s blackmailing is nothing like what she thought, and she’s landed herself into far more trouble than she bargained for.

Delve into The Bloodless Assassin, book 1 of a complete 9 book series that’s packed with adventure, banter, and quirky characters, all set in a richly imagined tropical world.