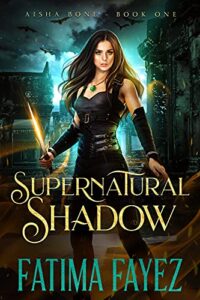 Some people call me an assassin, personally, I prefer the term bounty hunter.

In a world where magic is hidden from the general population, I’m hired to keep our secrets safe and take care of rogues by whatever means necessary.

When I accidentally targeted the wrong person, the Alliance offered me a deal — go to jail or work for them. Their first official request was to locate a vampire I thought I killed years ago. By the time I found him, he was going to wish he had stayed dead.

Supernatural Slayer is an action-packed urban fantasy romp through Barcelona with an assorted cast of witches, vampires, and shifters. It may also feature a snarky troll or two.

“No human beings were harmed in the writing of this book — only supernaturals.”