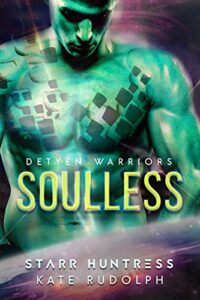 A cold hearted alien… scorching hot chemistry… and a fated mate bond too strong to be denied!

There’s nothing left in Raze. No love, no hate, nothing except the duty that he owes his people. But when he meets a fascinating and tough human woman on a barren planet something deep inside comes back to life and for the first time in years he yearns for more.

When a mission for the Sol Intelligence Agency gets out of hand, Sierra will need to use every skill she has and work with a mysterious alien warrior who awakens an unquenchable desire within her. He’s cold and forbidding, but when he looks at her there’s a fire in his eyes that opens up a whole world of possibilities.

The chemistry between Raze and Sierra is too hot to ignore, even if it should be impossible for a mate bond to form between them. But if Raze’s emotions fully return before he claims his denya, he might end up dead for good. There is no fighting destiny, especially for a doomed Detyen, and Raze already cheated fate once. To be with Sierra he’ll have to do it again, or neither of them will make it out alive.