Kraken and Canals: A Steampunk Romance (An Elemental Steampunk Chronicle)

Kraken and Canals: A Steampunk Romance (An Elemental Steampunk Chronicle) 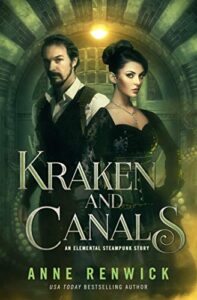 An old love. A giant kraken. A dive into the infested canals of Venice.

Time has run out. Rules must be broken and her patron’s wrath risked. To save the woman who raised her, Lady Judith must visit the underwater grotto of a giant lagoon kraken. Survival isn’t guaranteed, but Arturo will not let his love face the dangers of the canals alone.

THE ELEMENTAL STEAMPUNK CHRONICLES: The Golden Spider, The Silver Skull, The Iron Fin,

ELEMENTAL STEAMPUNK TALES: A Trace of Copper, In Pursuit of Dragons, A Reflection of Shadows, A Snowflake at Midnight, A Ghost in Amber