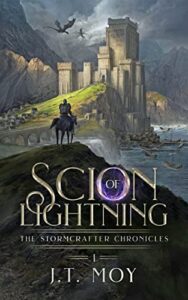 The start of an exciting new series in a brutal world filled with compelling characters, intense action, and a kingdom to save.

The deadliest blades are not made of steel . . . When Jaks almost kills another soldier with his volatile magic, he is forced to tread the fearful path of the electromancer. Succeed, he will be the first in a generation. Fail, he will lose everything.

As the ruthless king of Voros invades the land with axe warriors, skyships and dragons, Jaks and his battlemage master begin a quest to train his powers and uncover a potent artifact that could halt the rampaging enemy.

On their journey through dangerous lands, they are accompanied by a sharp-eyed ranger, a lethal assassin, and a mysterious foreigner with unworldly weapons.

However, nothing is simple when Jaks’ greatest adversary is much closer than he knows.