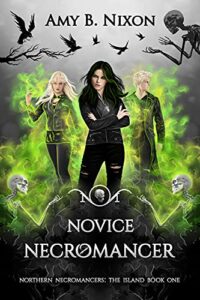 Intrigue, monsters and a forbidden affair. What could go wrong?

Learyn Dustrikke didn’t believe in black magic, until her aunt’s secrets forced her to flee San Francisco and seek shelter on the ominous Nordstrøm Island — an obscure Norwegian holm uprooted from the realm Vanaheim.

Ensnared by the island’s magic, Learyn finds herself in deadlier peril than ever before.

Between juggling the principles of necromancy, waltzing with intrigue and monsters, and falling for a man whose love is forbidden by the gods, can Learyn untangle the web of family secrets before it’s too late? Or will the threat she fled from catch up with her?

Hop on a ride to cinematic lands of atavistic Norse mythology in this NA Dark Fantasy series, as Learyn learns why black magic should not be taken lightly.