Masters Of The Broken Watches

Masters Of The Broken Watches 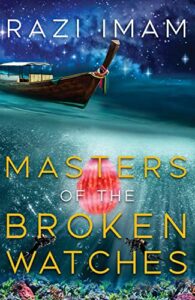 Masters of the Broken Watches is a must-read.

Sebastian Miles and his team of marine biologists stare at their watches. Time outside their lab has jumped forward by twenty-two hours. Minutes before this illogical space-time event, they were analyzing a mysterious glowing nodule extracted from an unknown marine specimen.

News of this marine life reaches powerful governments, inadvertently triggering a race to hunt, capture and control it. But these governments and their nationalist leaders have never faced a team of scientists known as the Paramarines. They have no idea to what lengths Sebastian and his Paramarines will go in order to protect the species from capture and exploitation.

The first of a multi-book series, this genre-bending novel leaves readers on the edge of their seats. Thrilling like Blake Crouch and science-driven like Ted Chang, all approached in ways you’ve never seen before. A captivating adventure, a heartbreaking story of love, and a true display of human ingenuity and bravery in the face of overwhelming odds.