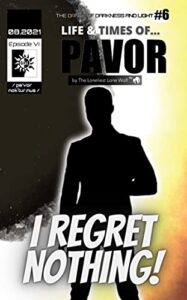 Two young men on different sides of a divided Realm…
One is consumed by hatred for everything the other stands for, while the other is is lost chasing delusions of greatness…
Little do they know that they’re mere pawns in a dangerous game played by powers they don’t even understand!

REVISIT THE ONE DEFINING MOMENT THAT CHANGED THEIR LIVES IN THE PAST… AND THE FALLOUT FROM THAT MOMENT HAS NOW BROUGHT THEM FACE TO FACE, BUT ON OPPOSITE SIDES!

As confusion and chaos rein supreme in his home Realm, unflinching in the sounds of the ongoing pandemonium… is Pavor!

PAVOR… IS HE THE CHOSEN ONE? A MISGUIDED FOOL? OR JUST ANOTHER EXPENDABLE TOOL?

But how does Pavor even fit into everything that has happened? And what does he really want out of doing all of this? He thinks he knows all the answers, but does he really?

PAVOR… IS HE A REBEL WITHOUT A CAUSE…? OR IS HE A LOST CAUSE HIMSELF…? WHO IS HE AND WHAT DOES HE WANT? DOES HE EVEN KNOW HIMSELF?

A life lives without mistakes, is hardly a life lived… but what is the story of the one named Pavor?

ALEX… HIS FLAMES OF HATRED FOR THE REBELS IS BURNING BRIGHT, BUT HOW DID THIS FIRE START?

What is the whole story behind the legend of ‘Alex of Koi’? Who was he before he became who he is now? He has shown how his past continues to define his present, but will it now effect the future of everyone else too?

Find out, when the story of The Dance of Darkness & Light continues… with Episode 6…

Life and Times of… PAVOR!!!