Daughter of No Worlds (The War of Lost Hearts Book 1)

Daughter of No Worlds (The War of Lost Hearts Book 1) 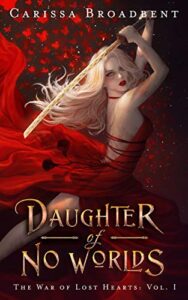 A former slave fighting for justice. A reclusive warrior who no longer believes it exists. And a dark magic that will entangle their fates.

Ripped from a forgotten homeland as a child, Tisaanah learned how to survive with nothing but a sharp wit and a touch of magic. But the night she tries to buy her freedom, she barely escapes with her life.

Desperate to save the best friend she left behind, Tisaanah journeys to the Orders, the most powerful organizations of magic Wielders in the world. But to join their ranks, she must complete an apprenticeship with Maxantarius Farlione, a handsome and reclusive fire wielder who despises the Orders.

The Orders’ intentions are cryptic, and Tisaanah must prove herself under the threat of looming war. But even more dangerous are her growing feelings for Maxantarius. The bloody past he wants to forget may be the key to her future… or the downfall of them both.

Even if it means wielding death itself.