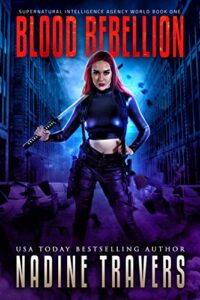 It sucks being a daywalker but I’ve got a vampire to catch.

A rogue vampire is on the loose, and it’s Casey’s mission to drag him back to Vampire Internal Affairs headquarters to face justice. It’s a job only a daywalker like her can handle, and she’s the best there is.

While tracking down Damaris, Casey uncovers a new threat within the supernatural community that makes no sense, and she teams up with the SIA (Supernatural Intelligence Agency) to help her solve the mystery and bring Damaris to justice.

But things keep getting deeper and muddier, and as she unveils a decade-old conspiracy, she discovers more secrets than she was expecting and one that will change her life forever.

Damaris calls it a rebellion. It seems that some in the paranormal community are fed-up with the factions dividing the different species, and they are ready to destroy everything in order to shift the balance of power.

With the combined powers of her supernatural crew, she only has one chance to discover the true villain—but is she willing to risk it all in a dangerous game?

This is a paranormal detective series/supernatural thriller for readers who like thriller-based urban fantasy with snarky heroines who won’t give up on her mission.