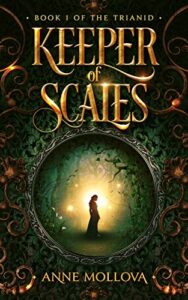 A princess with a secret. An ancient evil rising. A kingdom caught in the balance.

For centuries, the Trianid has kept the kingdom of Dúramair peaceful and prosperous. Formed by Dúramair’s greatest warrior, an abbess who weaves visions of the future, and the Keeper of Scales, a healer gifted with Sight of the faerie realm, the Trianid has passed on its wisdom and responsibilities generation after generation to its carefully sought and selected apprentices.

Alyen, crown princess of Dúramair, has trained her whole life to be queen. She’s kept her Sight a secret, trusting that the Keeper of Scales will find an apprentice soon—for surely one other candidate can be found. But when news comes from the north of dark magic returning to Dúramair, Alyen is forced to make the hardest decision of her life. A decision that could determine the fate of her kingdom.

Alyen plunges into a world of elemental magic, new friendships, and a budding romance. But when tragedy strikes at the heart of the Trianid, she and her friends find that they are the last hope for Dúramair’s victory in the looming war. Forced to choose between love and duty, Alyen struggles to master her growing powers, knowing that if she fails, she risks destroying everything and everyone she loves.

Click Buy Now to enter the world of The Trianid!