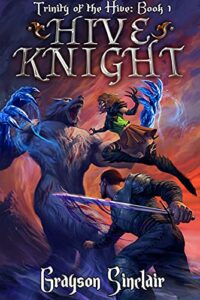 When they took my life, I thought I had nothing left to lose. I was a fool.

The Ouroboros Project was my last chance at salvation, but the new, virtual reality was just as bad as the world I’d left. Backroom deals with corrupt nobles, slavery, and murder were all swept under the rug in the pursuit of gold.

Despite everything, I found mercenary life fulfilling, until my guild was attacked. Now, I’ve got unknown, extremely rich enemies on all sides, a mysterious woman with strange magic and compound eyes, and a guild to save.

The brought their war to my home. It’s only fair I return the favor.

Hive Knight is book 1 of the Trinity of the Hive series, the first in a dark fantasy series by Grayson Sinclair. Hive Knight features a dystopian real world and a gritty, bleak and immersive VR world.

Not for the faint of heart or those with weak constitutions (roll a saving throw). Doesn’t contain a harem.