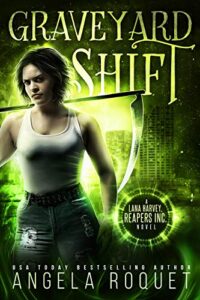 Lana Harvey is a reaper, and a lousy one at that. She resides in Limbo City, the modern capital of the collective afterlives, where she likes to stick it to the man (the legendary Grim Reaper himself) by harvesting the bare minimum of souls required of her. She’d much rather be hanging out with Gabriel, her favorite archangel, at Purgatory Lounge. But when a shocking promotion falls in Lana’s lap, she learns something that could unravel the very fabric of Eternity. If the job isn’t completed, there could be some real hell to pay.

New to Lana and Limbo City?
If you love urban fantasy steeped in mythology, dark humor, gritty action, and paranormal romance, then this is the series for you!