Fly Me to the Moon: A Sylvia Stryker Space Case Mystery

Fly Me to the Moon: A Sylvia Stryker Space Case Mystery 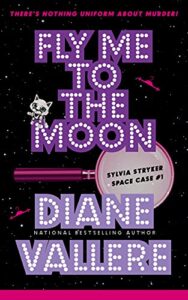 Sylvia Stryker wants a job on a cruise ship. A family scandal led to a white lie. Will a dead body in her ward change the trajectory of her life?

Sylvia Stryker used to help run her parents’ dry ice farm, until her dad’s arrest nearly left them bankrupt. But after finagling a job on board an outer space cruise ship, she’s ready to explore all that outer space has to offer. With a private room in the staff quarters, her robot cat by her side, and the responsibilities of uniform management, Sylvia is thrilled to return to work – until she discovers the second navigation officer dead in the inventory closet.

Neptune, the head of ship security, finds Sylvia’s presence to be the most suspicious part of the incident; that’s what happens when you hack your way into a last-minute job opportunity! But despite his efforts to pin the murder on Sylvia, she won’t accept how the clues are unfolding. And if Sylvia doesn’t expose the murderer on the cruise, then she’ll never learn the truth about her family.