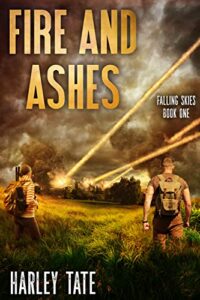 An asteroid on a collision course with Earth. A government coverup. A family caught in the middle.

Welcome to Falling Skies. Do you have what it takes to survive?

Former Marine Caleb Machert is managing overworked line crews when reports of an impending world-wide disaster hit the news. His men panic, but he’s not buying it. The government would never hide something this important, would they?

Elizabeth is busy herding her students into the library when she discovers an asteroid is headed straight for the east coast. Her first instinct is to find her husband and daughter and flee west, but she can’t leave. Twenty first graders are depending on her.

Lana spends her morning slogging though a calculus exam, oblivious to the news spreading across social media. When her boyfriend demands they escape before it’s too late, she refuses. She’s not leaving without her parents.

It’s a race against the clock for the Macherts to find each other and reach safety before the world they know and love ceases to exist.

Fire and Ashes is book one in the Falling Skies series, a post-apocalyptic thriller series following ordinary people struggling to survive when a meteor strike plunges the United States into chaos.