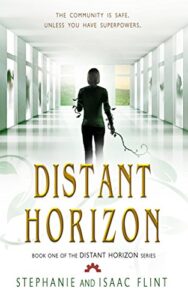 The Community hides a terrifying secret.

Sixty years ago, a hallucinogenic plague annihilated half the world’s population, leading to the formation of a strict Community—an international society that promises its citizens safety, security, and efficiency. To protect everyone from a resurgence of the plague, students are given a daily pill in their teen years and tested with the mandatory Health Scan before entering the adult world. It is boring but safe…

Except that Jenna hasn’t been taking her daily pill, and a surprise Health Scan was just announced.

Terrified she’s going to fail the scan, Jenna digs into everything she can find about what happens to those who fail–

And discovers none of them have returned, despite assurances of the Health Scan’s safety.

Making matters worse, two of the Community’s most prominent leaders have arrived on campus in an unprecedented visit, and Jenna’s long-thought-dead grandfather decides now would be a great time to try kidnapping her.

Turns out he’s the leader of a rebellion against the Community and he believes the plague is a cover-up for powers. Normally she would dismiss him as crazy, especially since those leaders have him hauled off to the coolers after she calls for help.

But something doesn’t sit right.

Why was the Health Scan announced last minute? Why did not one, but two world leaders show up to a routine scan?

Read Distant Horizon to uncover the truth in this thrilling dystopia!