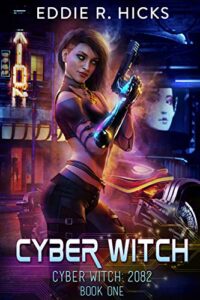 In the year 2082, the neon-lit city of Los Angeles is home to the largest community of witches and warlocks in the world.

Death by one of them is also the leading cause of death among those in the LAPD.

Estrella Rodriguez just got transferred to the LAPD. She wasn’t pleased to learn about it.

As a cyborg witch, augmented with state-of-the-art cyberware, Estrella commands a horde of nanites to bend the world to her will. And sometimes bend the laws of physics.

Her first day on the job takes a bizarre turn when she stumbles upon several witch kidnappings. She has no idea who’s responsible and why.

A hacker named Ray holds the answers, so does a telepathic black op operative looking to collect Ray’s head, and a flirtatious witch hoping to distract Estrella with her smiles and charm.

There’s something weird brewing, something the corporations want, and the kidnapped witches are just the start of it.

If Estrella can’t get to Ray, and the truth he holds on time, then the streets of Los Angeles will get really violent, real quick …

… More so than it already is.