Burn Out: Book 1 of the Burn Out Trilogy

Burn Out: Book 1 of the Burn Out Trilogy 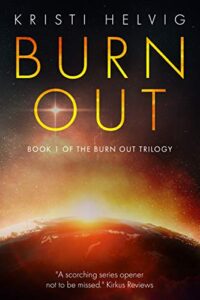 An uninhabitable planet. A woman desperate to escape. Fellow survivors who want her dead.

When Earth’s sun turns red giant way ahead of schedule, the planet becomes a scorched wasteland. Tora Reynolds is holed up alone in an underground shelter—her brilliant scientist father murdered, her mother and sister burned to death. Everyone she ever loved is dead, along with most everyone else on the planet. Her only company, Trigger, is a gun—one of the bio-energetic weapons her father created for the government before his conscience kicked in.

A lucky few escape the disaster by heading for space, but when family friend, Markus, returns to Earth with hired guns who want her father’s weapons, Tora discovers her fellow survivors are even deadlier than the hostile environment. She must choose between saving herself by giving up the guns or honoring her father’s request to save what’s left of humanity from the most lethal weapons in existence. A thrilling post-apocalypse sci-fi read.