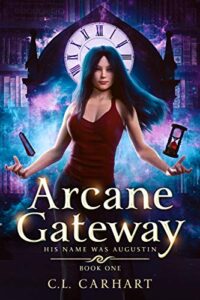 “All of history is open to you now. You need only to choose which era you want to claim as your own.”

Swanie von Thaden has enough magic going on in her life already. Having grown up in a Teutonic world rife with elemental powers, spiritual entities, and mystical traditions, she’s never really integrated into everyday life. Now she’s poised to enter college in a few weeks’ time. There, she’ll need to fit in with normal people who could never fathom the magic she wields. But who would dare to befriend an elemental witch?

During one last summer vacation, Swanie meets a fairy in the forest who leads her to a mysterious relic rumored to harbor the power over time itself. Her plans for a normal life spiral into the ground as she finds herself questioning everything her people hold dear. Now, with the help of her most trusted mentors, she must seek out darker truths than she had ever imagined. Is there more to her people’s history than meets the eye? What sinister forces lurk in the shadows of Teutonic magic?