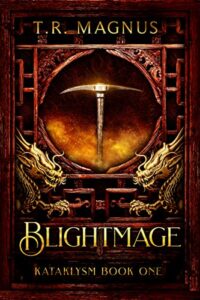 Embrace the (B)light…
It has been fifty years since the sun died over Ashathar.

was born in the blight. As one of the “touched” he is devoid of power.

He is forbidden from following the Lightweaver Path.

The “touched” still serve the brightlands, working the mines to extract sunstone; to deliver it to the Lightweavers, the saviors, preservers, and rulers of Ashathar.

The largest sunstone ever extracted from the mines has been found. It could empower the brightlands for months. When it is discovered that someone stole the sunstone’s power, Blaike is exiled from the brightlands. Was he really to blame? Can he survive the blight? Or, is there a larger threat than the Lightweavers ever realized that could destroy Ashathar once and for all?

Ming Yue is the daughter of a brewer. The Ming clan’s elixirs have supported those on the Lightweaver path for a half-century.

Yue’s twin brother was taken by the blighted when they were children. But when she’s denied access to the Lightweaver path, since she is not the first-born child of her clan, Yue’s father tasks her to create an elixir that might save her brother from the blight.

He’s the only chance the Ming clan has to remain prominent amongst the brightborn, to produce a Lightweaver who might protect Ashathar for years to come.

But there is no guarantee that Yue’s brother has survived among the blighted. Would he remember her at all? Is the mysterious figure, found in the blight, truly her brother–or is he someone else, someone who might challenge the dominance of the Lightweavers and the security of Ashathar?