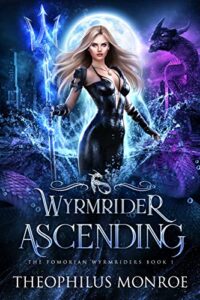 Larger than dragons. Nastier than snakes. Terrifying as hell.
The wyrm have escaped the void.

They threaten the underwater mer-kingdom of Fomoria… a kingdom of my ancestors… and the city of New Orleans.

Why am I the only one who can hear their cries?

Something else is coming… something much worse…

Even the wyrm are terrified…

I have to save them, before the Fomorian merlegion destroys them.

But can I even tame these monsters?

If not, it won’t just mean the slaughter of the merfolk, or the death of humanity.

It will mean the end of existence itself.

Wyrmrider Ascending is the first book in Theophilus Monroe’s The Fomorian Wyrmriders trilogy. If you like action-packed urban fantasy stories featuring badass snarky heroines, or dragonrider stories, you’ll love these books. Readers of Monroe’s Druid Legacy and Voodoo Legacy have met Joni Campbell before. But no one has ever seen her like this…