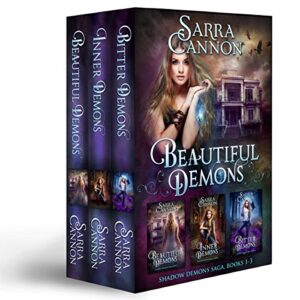 Over a quarter of a million copies sold in The Shadow Demons Saga!! Begin this epic journey against the darkness with the first three books, FREE! For a limited time, get Book 4, Shadow Demons, for just 99 cents.

Beautiful Demons
Harper Madison isn’t like other girls. She has extraordinary powers, but her inability to control them has gotten her kicked from so many foster homes she’s lost count. Shadowford Home for Girls is her last chance, and she hopes Peachville High will be the fresh start she needs.

But when evidence ties her to the gruesome murder of a Demons cheerleader, Harper discovers this small town has a big secret.

Inner Demons
Harper Madison is willing to do whatever it takes to get answers about the disappearance of her mother and about her own strange powers. Even if it means joining the Demons cheerleading squad, a secret training ground for witches. The training opens up a new world for Harper. It’s a world of beauty and magic beyond her wildest dreams, but it’s also a world of sinister expectations.

A world where every secret hides an even darker secret.

Bitter Demons
So far, life in Peachville has been tough for Harper. She’s survived attacks on her life, learned how to control her magic, and met the most gorgeous guy with an unbelievable secret. After her latest stunt at Brighton Hospital, life has gotten even more complicated. The Order of Shadows is determined to tighten their control on her life.

When a future Prima from a nearby demon gate comes to town, she and Harper decide to use glamours to switch places at a party. All Harper wants is to have a little fun.

But the night will end in blood.

And Harper will find out the attack was meant for her…