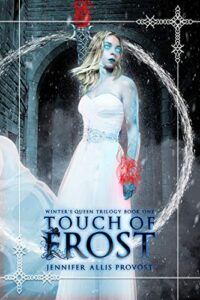 Jennifer Allis Provost presents Touch of Frost, an all-new novel set after the events of the Gallowglass trilogy and featuring Anya, the newly minted Queen of Winter.

Anya never thought she would be Queen of Winter. At the rate her powers are growing she might freeze all of Scotland.

When Beira, the Cailleach Bheur of legend, was stripped of her crown it was accepted that Anya would be the new Queen of Winter. Anya was Beira’s only daughter and the only one who could safely see Scotland through the coming chill, but as the cold season drew near Anya’s burgeoning abilities spiraled out of control, freezing anything—and anyone—she touched.

There were two things Chris never doubted: his love for Anya, and that she could handle her new role as Winter’s Queen. As for everything else in his life, that was another matter. He was a teacher who couldn’t teach, because Carson University had been wrecked by warring gods. He was a bestselling author who couldn’t publish his next book, because of an ongoing legal battle sparked by his ex-fiancée. And try as he might he still couldn’t live down having once been the Seelie Queen’s lover.

With Anya’s powers threatening to destroy everyone around her, Chris turned to his sister and her partner, the gallowglass, for help. Together they learned that Anya had more enemies than she ever knew, and they’d followed her out of Elphame and to Scotland itself.

As Chris frantically searched for a way to help Anya, she went to her mother for guidance. Living in the rebuilt Winter Palace, Beira no longer had the strength to hold Anya’s gifts in check—but what she did have was a secret passage into the Unseelie Court. There, Anya learned a secret so big it would shake the very foundations of Elphame. But would these secrets matter if Anya froze the realm solid?

TOUCH OF FROST – Book One of the Winter’s Queen Trilogy