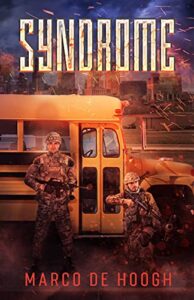 An ancient order plans to unleash their man-made resolution upon the world. They are the chosen few that will inherit the earth. First the crops withered. Then the animals perished. Then it was mankind’s turn.

Not everything went to plan, though. Millions rose up from the dead and became slaves to their programming: Hunt down and destroy the living.

Against all odds, there are survivors. They face a dangerous world, intent on enslaving or destroying them.

This is a story about people, with all their faults and intentions. Of relationships built and betrayed. Of paths to corruption and paths to redemption.

Follow along as events unfold in Syndrome, the first volume in Apocalypsis Immortuos