A stranger from space stuck on a strange fantasy planet.

Paladins are supposed to exist in stories and games, right?

It started when he held an ancient sword, brimming with strange magic. Things got weird after that, like stat screens listing his nifty skills and attributes. He has no idea why, but he’s not alone.

Xanthe, one of the few shadow angels free from slavery, is experiencing something similar. A sword assigned Xanthe the class of a Blade Dancer and has given her enough charisma to charm anyone to her will.

The planet of Faeheim is undergoing the same change. A wave of energy is changing the world, assigning classes and levels to the fae, turning animals into monsters, and spurring the empire to commit multiple atrocities.

Atrocities the empire can’t risk people like Guy and Xanthe finding out.

Cut off from his ship and the rest of the galaxy, Guy must survive on the gamified planet, level up, and learn what makes him and Xanthe special.

Before the empire gets to them.

There’s a reason Guy and Xanthe were chosen for this and if they don’t learn it soon, then a lot of people are going to get one-shotted by high-level imperial soldiers. 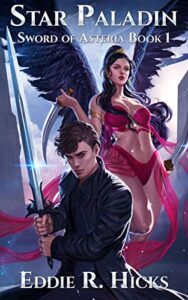