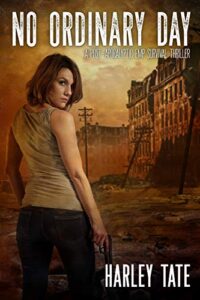 When the man hired to kill you saves your life, do you owe him a favor?

Emma’s got a full plate: prepping her testimony before Congress, working a temp job at a research lab, ignoring the nasty looks when people learn she’s a whistleblower. When a power outage strands her in a work elevator, a handsome stranger is all-too-ready to help.

If the grid collapses, does your mission change?

John might appear like an average good guy, but underneath, he’s a seasoned killer. Hired to snuff out an unsuspecting whistleblower, he’s more than prepared to handle a little blackout.

With limited communication and chaos unfolding outside, Emma and John forge a tenuous alliance. Will the pair survive the end of the world as we know it, or will nothing stand in the way of a hitman’s mission?

The EMP is only the beginning.

No Ordinary Day is book one in the No Ordinary Day series, a post-apocalyptic thriller series following ordinary people struggling to survive when an EMP plunges the United States into chaos.