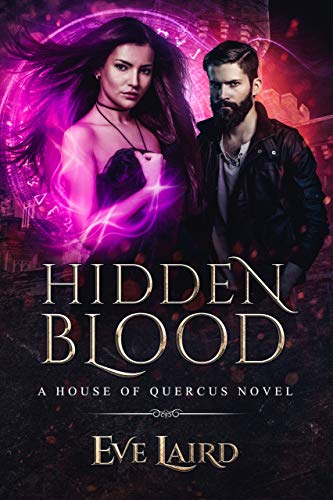 Her sister vanished into the Human world, a dangerous place for an emerging mage. There’s only one Tracker who can help, but he’s the smouldering-hot vampire whose kiss she can’t forget.

Thorne:
It should be easy money. A private security detail for one of the most powerful families in the House of Quercus. Then I discover my real mission: track and find a missing girl, using her older half-sister’s blood.

Kenzie’s father is sending her as bait. An heiress, a would-be princess in a gilded cage. What’s worse, we have history. A single stolen kiss at a party, that memory still flutters on my lips. Then she disappeared back to her entitled world, never to be seen again. Turns out she’s trapped as much as everyone else.

When I see the pain she carries and the fears she hides, I’ll do anything to stop those tears. Together, we’ll rescue her sister.

Kenzie:
I’ll do whatever it takes to find the sister I never knew I had and keep her far from our father’s evil ways.

For now, I’ll comply with his demands for my help and my silence. He wants me to secretly act as bait to find her and doesn’t think twice about sending me into harm’s way.

But I won’t be alone. Thorne, the broody, elusive and achingly hot Vampire, has been hired find her. He needs my blood to track her so I have to go too. We’ve been close before and I can’t resist wanting something more. The dangerous Human world has been forbidden to me until now, I’ll have to trust him with my life.

We’re forced to work together, secretly, to find her and rescue her, before she’s broken by demons or worse. Yet my intuition keeps insisting that the path ahead will come at a heavy cost for me and my magick.

This series is perfect for readers who love paranormal romance and urban fantasy. Delve into a world different from anything you can imagine. The Other Natured: vampires, shifters, dragons, angels, face and mages have built a sanctuary on the Human Realm. They had to. Most humans have no idea they exist but those who do would kill them mercilessly. And let’s not talk about the demons…