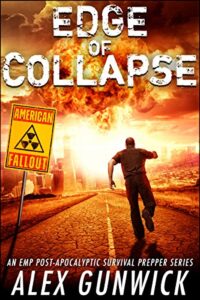 Luke is four hundred miles away from home when the first bomb drops. In seconds, his routine business trip becomes a nightmarish struggle to survive. After narrowly escaping a nuclear explosion in San Francisco, the Navy SEAL must travel through a world without rule of law. Relying on his skills and the items in his Bug Out Bag, he fights an epic battle as he struggles to get home. Nothing will stop him from getting back to his family. As his resources run out, his resourcefulness kicks in. His family’s depending on him and he won’t let them down—even if it means leaving a trail of destruction in his wake.

Liz can’t believe they’re under attack. At first, it seems like things won’t be too bad. Yet within hours, it seems like the whole world’s gone crazy. With communication lines down, she’s unable to reach her husband, Luke. Getting her kids to their Bug Out Location won’t be easy, but she’s determined to make it. It’s well stocked and safely tucked away in a canyon. But as people begin to flee the cities, a new darkness spreads across America. Her struggle to survive rips apart her core values and forces her to examine what it means to be a mother, a wife, and a survivor.

American Fallout is a thrilling post-apocalyptic survival prepper EMP fiction series that makes you step back and ask: Could this happen tomorrow? What would happen if the world’s nuclear arsenal was unleashed? What would you do if it happened while you were away from home? And how would your family survive?