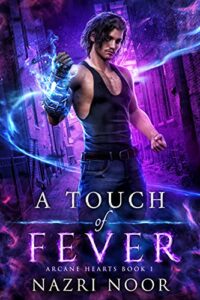 What do you do when you can’t cast spells? You make your own magic.

Jackson Pryde was never great at wielding magic. Instead, he works as an artificer, crafting enchanted devices in the Black Market, a shadowy bazaar of wonders. But Xander Wright, the mouthy, pretentious mage next door, hates all the hammering in Jackson’s workshop.

When a chance assignment forces them to team up, they discover a terrifying predicament. Something is driving members of the magical community into murderous rages. Jackson and Xander must combine might and magic to find the source of the Fever and stop it. Can they put aside their differences long enough to end the Fever, or will they succumb to its bloodthirsty curse?

A Touch of Fever is a 70,000-word M/M urban fantasy romance with a HFN ending. Join a fast-talking artificer and a snarky sorcerer, best friends turned bitter enemies, as they navigate an adventure filled with strange flora, mythical fauna, and magical murders. If you like your urban fantasy with humor, horror, and a whole lot of heart, you’ve come to the right place. Experience A Touch of Fever today.