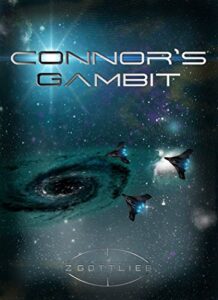 Brad Johnson, is a lone witness to a UFO sighting…

He suddenly becomes an alien target and quickly finds himself embroiled in an off-world adventure. Relying only on his training and streetwise skills to survive, Brad struggles to understand the bitter conflict between the aliens in an intergalactic war that has been waged for many millennia.

Every day is a battle for survival which brings him closer and closer to the truth!

One day, he learns that one faction threatens Earth’s very security, while the other wants something entirely different…All Brad wants is to return home to his family, but not until he embarks on the greatest adventure of his life

Get your copy of Connor’s Gambit today!