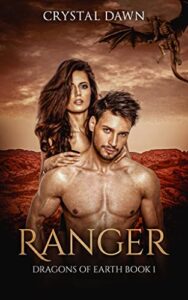 Ranger was now a king. Once he hit the rank of general on his home planet, he had known eventually he would be king. But at that time, he had thought he would be a king at home. That just shows that life can change directions easily. He’d found his faded mate and he had no intention of leaving her behind and he knew at this point she was not ready to leave here so he would stay as well. She would be his.

Toni had thought at one time there was chemistry between her and her Ranger, but he ran hot and cool and had finally convinced her that it was all in her head. He was running hot right now, but that didn’t really mean anything. She had accepted the offer to help them manage their country. It wasn’t like she didn’t owe them something because she did.

They had saved her and her brother from being terrorized and trying to make it with very little money. Her brother was now going to college in the country she was headed to. They had also told her that she could go to college part time and eventually get our medical license. She would work on her life and try to get things straightened out and she wouldn’t worry about Ranger because she knew he would be running cold before long.

Would they ever be able to get together?
Could Ranger ever get a whole country under control?
And with the rebels and the mob out to get them, could they keep their enemies from learning their lives.